Your web browser Internet Explorer 11 is outdated and no longer supported.

The display of content and functionality is not guaranteed.

As a rapid method of producing flat surfaces and notches, milling gradually replaced planing in the 19th century. The cutting manufacturing process is characterized by the fact that a milling tool with geometrically defined cutting edges is set in rotation in order to remove material from a workpiece. For this purpose, the tool is moved perpendicularly or obliquely to the axis of rotation in a feed motion. Unlike other metal-cutting manufacturing processes, milling cannot be done manually, giving it a very recent – but equally successful – history. In the 20th century, electric motors first became established as the drive for milling machines, followed later by electronic controls. Today, milling is considered one of the most versatile technologies in machining. The selection of machines is correspondingly wide.

Content
1.
More versatile with additional axes
2.
The right machine for every application

In metalworking, milling has been the method of choice for many decades to produce geometric bodies from unmachined parts. For this purpose, the workpiece is clamped and machined with the required milling tools. Depending on the type of machine, this is done either horizontally – the spindle with the tool is approached from the side – or vertically. Here, the spindle comes from above. On machines with kinematics in the milling head, the tool can be approached to the workpiece in any angular position. Ultimately, the component decides which orientation is the better one. For example, chip fall is significantly better with horizontal milling, which is an advantage when machining bores.

The cutting manufacturing process is characterized by the fact that a milling tool with geometrically defined cutting edges is set in rotation in order to remove material from a workpiece.

In their simplest construction, milling machines are designed for 3-axis machining: The tool moves over the workpiece in the X, Y and Z directions. In 4-axis machines, a rotary axis is added – either as a B axis in the headstock, in the table, or in the form of a mounted part attachment. This allows tools to be set at an angle without first having to reclamp the tool, as is the case with 3-axis milling. Machine tool manufacturers implement 5-axis milling with a second rotary axis. This enables almost any orientation of the workpiece, where the milling tool can reach five sides and produce a component almost completely. A reclamping operation is required at most for machining the sixth side. Finally, 5-axis simultaneous milling, in which all axes are interpolated, has evolved from 5-axis milling. In this case, if the kinematics are housed in the table, the workpiece is moved continuously in all directions while the milling tool removes material. With head kinematics, the second rotary axis is also in the milling head. This results in so-called free-form surfaces, which are commonplace in mold making, for example.

Over time, milling has developed into an extremely advanced machining technology with special characteristics. High-speed milling, for example, uses much higher spindle speeds to produce higher-quality surfaces – a productivity gain because it minimizes the amount of finishing work required.

The right machine for every application

DMG MORI has been shaping milling for 100 years. The portfolio includes over 25 series ranging from the simple 3-axis M1 machine to the 5-axis high-tech machining center of the DMU monoBLOCK series; CMX V and DMC V models for vertical machining as well as the horizontal DMC H linear and NHX series; the compact machining center DMP 70 and the XXL machines DMU 600 P and DMU 600 Gantry with several meters of travel. Technology integration such as ultrasonic milling, laser machining or grinding are also becoming increasingly important. DMG MORI completes its versatile product range with automation solutions for almost all models and a holistic offering for end-to-end digitalization of manufacturing. This means that milling is and will remain a highly productive and competitive manufacturing technology in the future. 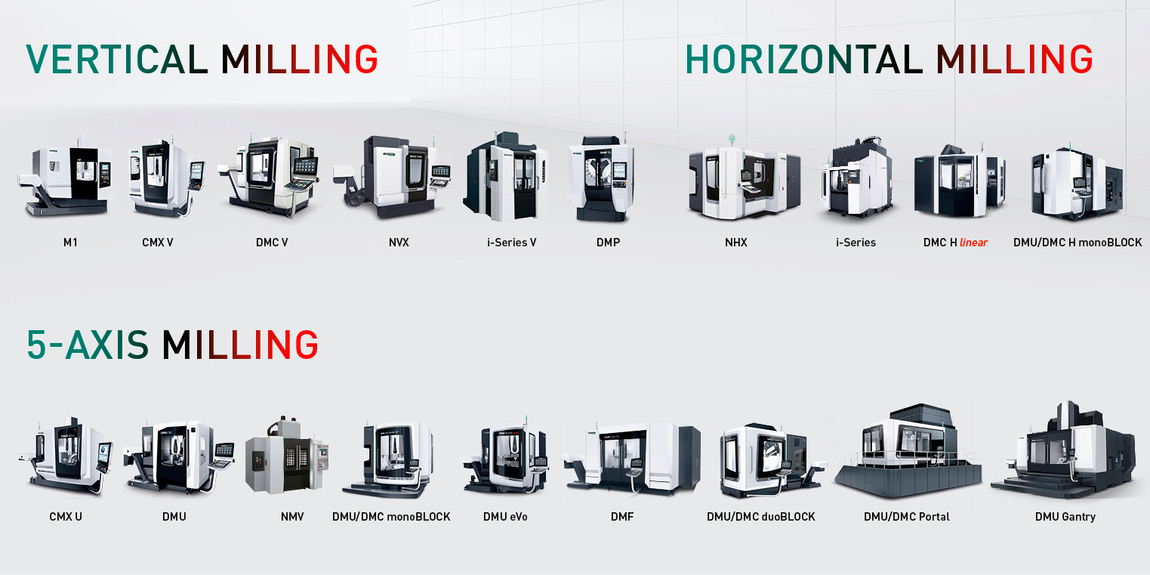 DMG MORI has been shaping milling for 100 years.
more
Download

Thank you very much for your interest in our products.
To download our PDF brochures please fill in the form below.
If you accept the storage of cookies, this form appears only once during your visit.